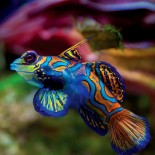 A recent article published in the prestigious science journal, Science, reports that Swedish scientists exposed European perch Perca fluviatilis to different concentrations of the anti-anxiety medication Oxazepam to study its effect on fish in the wild.

Presumably, the drug attaches to receptors in the perch’s brain, which are similar to those in the human brain, allowing it to have comparable affects on behavior in fish and humans.

Beel, you ask, why are the fish on drugs?  Well, there are two anwers.  First, Sweden is a beautiful country, but it ain’t Norway.  And the fish know it.

Second, perch live in rivers and lakes.  Humans take lots of Oxazepam, evidently this is particularly true in Sweden (the Swedes also know that Sweden ain’t Norway).  Humans excrete the drug in their, ahem, piss and some of the drug eventually makes it way into streams and lakes. Lovely.

So, a study needed to be conducted and the Swedes assembled a team.

Whoops, Beel’s bad.  So, the Swedes assembled a team of scientists who, when not taking Oxazepam, found that perch exposed to the drug were less social, more active, and bolder than unexposed fish.

They also found that the greater the concentration of drug to which fish were exposed, the more rapidly they fed on zooplankton, small shrimp-like animals. Please friends, allow Beel to present these results:

Feeding rate of European perch after Oxazepam treatments.  The higher the bar, the longer it took fish to eat their 1st, 10th, and 20th zooplankton(source)

Okay, they had the munchies.  Who doesn’t after loading up on drugs?

The Swedish scientists describe potential ecosystem effects of perch run amok with insatiable appetites.  But its just not that simple.  Supposed the Swedes clean up their piss (and rivers and lakes)?

So, do you prefer hyperactive perch with the munchies, or psychotic, quivering, blurry eyed, sweating, and farting perch, with hairloss, feelings of paranoia, suicidal thoughts, and the munchies (= food cravings)?

This entry was posted on February 15, 2013 by denstormer in Commentary and tagged environmental concerns, Europe.